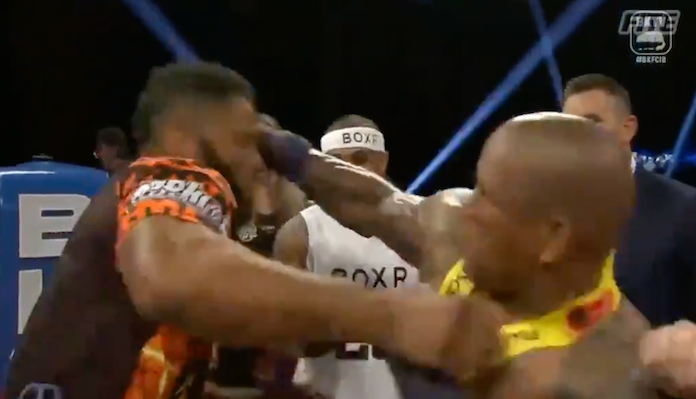 Lombard and Riggs, two of the most recognizable MMA fighters in the world, took their talents to the BKFC ring on Saturday night as they squared off for the promotion’s middleweight title. The fight was competitive but ended in a bizarre fashion when Lombard pulled Riggs’ shorts and punched him in the eye, which led to Riggs not being able to see and therefore not able to continue, leading to Lombard being declared the winner via TKO.

Following the fight, Hunt, who is an MMA fighter-turned BKFC middleweight competitor, entered the ring and approached Lombard. The Cuban was not happy that Hunt got into his personal space and he proceeded to land a nasty two-punch combo on his unsuspecting rival. It was quite the scene, and you can take a look at the whole video of it below.

We just had a little scuffle between @HectorLombard and #Juggernaut #LorenzoHunt after Hector was announced as the winner.#BKFC18

We just had a little scuffle between @HectorLombard and #Juggernaut #LorenzoHunt after Hector was announced as the winner.

Lombard was supposed to receive a post-fight interview following the win over Riggs, but after getting into the scuffle with Hunt, the ring was cleared and he didn’t get a chance to talk after throwing the two-piece combo on Hunt and landing clean. With Lombard and Hunt both middleweight competitors for BKFC, it seems likely that this fight will happen in the near future as both men clearly do not like each other and there is some bad blood there. With Lombard currently the BKFC middleweight champ and with Hunt on a winning streak in the promotion, perhaps this is a fight that we will see in the ring very soon.

What do you think is next for Hector Lombard after beating Joe Riggs at BKFC 18?

‘Watch the f*ck out!’ Gonzalez shows off swollen hands after battering rival on bare-knuckle debut as VanZant and Ostovich look on

BKFC 18 Highlights! Lombard Brawls In The Ring After Controversial Win