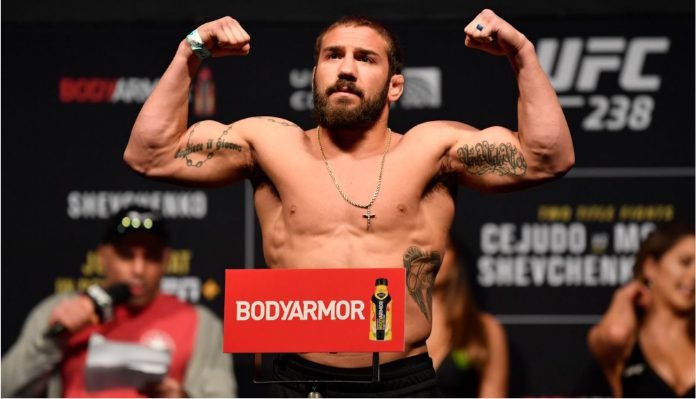 Jimmie Rivera fought the who’s who of the UFC’s bantamweight division but he says one fight sticks out as his toughest fight.

Rivera competed in the UFC from 2015 to 2021 and fought the likes of Petr Yan, Aljamain Sterling, Urijah Faber, Pedro Munhoz, Marlon Moraes, and John Dodson among others. Yet for Rivera, he says the toughest fight of his career was his 2019 scrap against Petr Yan that he lost by decision.

“My hardest fight in the UFC? I’d probably have to say Yan was my hardest fight. If I had to get fights back, two fights I’d love are the Sterling fight, I just didn’t show up that day, I had a bad weight cut,” Rivera said on Just Scrap Radio on BJPENN.com. “Then the Yan fight, I made a mistake two rounds in a row where I was winning, and in the last 30 seconds I figured I’d relax because I got the round and then he threw a shot, just didn’t see it and I got caught with a flash knockdown. Those are the tough ones. If you go back and look at Yan’s fights, I think the toughest fight he had was the last Sterling fight because he doesn’t know to defend jiu-jitsu and that opened up what his weaknesses are and then my fight.”

As Rivera said, he had a ton of success in the fight but Yan was able to land timely big shots and showed off how good his striking is.

After that fight, Rivera then beat Cody Stamann before losing to Munhoz and then singing with BKFC where he will have his debut on Friday night. As for Yan, he then knocked out Faber and TKO’d Jose Aldo to become the champ and prove how good he is. But, as Rivera says, he still is one of Yan’s toughest tests to date.

Are you surprised by Jimmie Rivera’s answer?

WHEN COCKY FIGHTERS GET KNOCKED OUT #BAREKNUCKLE EDITION INCLUDING DOUBLE #KNOCKOUT