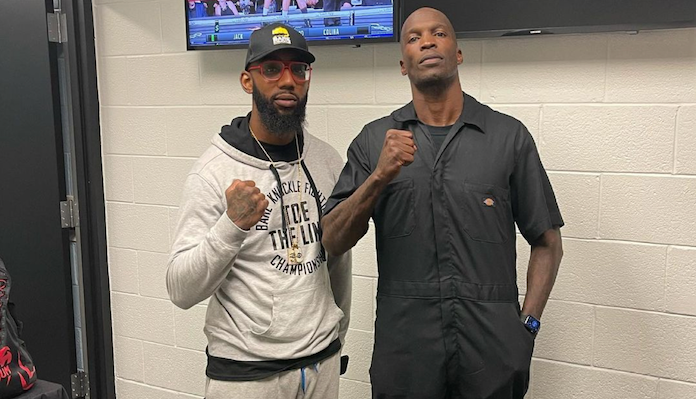 Johnson, the former NFL star, made his boxing debut against the BKFC veteran Maxwell on the undercard of the Floyd Mayweather vs. Logan Paul card. Despite being 43 years old and stepping into the boxing ring for the first time, Johnson did well in the fight, as he managed to go the full four rounds and looked pretty good in doing so. He showed off good footwork in the fight and also landed some nice punches on Maxwell. He also survived a late knockdown in the fourth round, though the exhibition fight did not have judges.

Taking to his social media following the fight, Johnson issued a statement about the match with Maxwell. Johnson praised his opponent for his performance and said he’s his fan now.

Salute to my guy @brian_maxwell_12 for tonight, much love & continued success in your career, you have a new fan & supporter in me.

Johnson starred in the NFL from 2001 to 2011, and he was one of the top wide receiving threats in the sport while he starred for the Cincinnati Bengals and the New England Patriots. In a seven-year stretch from 2003 to 2009, Johnson made six Pro Bowls and he was named a first-team All-Pro twice and a second-team All-Pro once. However, Johnson found himself out of the NFL in 2012. He tried his hand at the Canadian Football League when he signed with the Montreal Alouettes in 2014, but most fans remember him from his NFL stint. Of course, he’s far removed from professional football and is now trying his hand at boxing. It feels like this was a one-time thing for Johnson but who knows what happens.

Do you think Chad Johnson will fight in another boxing match or is he one-and-done?